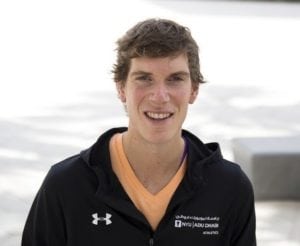 Matt MacDonald is the Physical Education Curriculum Manager at NYU Abu Dhabi. Before moving to the Middle East, Matt founded his personal training business We Move This Town in Canada. He graduated from St. Francis Xavier University with degrees in Human Kinetics, Bachelor of Education, and Masters in Physical Education.

Matt grew up as a fast food child of the 90s, dining on convenient processed foods, and once prided himself on out-eating his friends. Like many people, as a teenager he experienced horrendous acne, and was embarrassed by his physique. It was when he was in university studying human kinetics that he eventually started to take his health more seriously. Trying several different diets, his body responded most favorably when he switched to a whole foods plant based diet.

Since going Plant Based, Matt has cycled 8,000 km across the USA; 6,700 km across Canada; completed two Ironman events; qualified for the Boston Marathon on his first attempt; and placed first in an ultramarathon.

Matt’s not trying to sell you anything; he is just wishing to save lives one banana at a time. His message is simple: eat more plants.