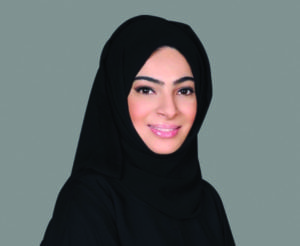 Lubna Qassim is the Senior Executive Vice President, Group Chief General Counsel of Emirates NBD Bank PJSC and also their first female EXCO member. She has built and leads one of the best in-house legal teams in the Middle East as elected by The Legal 500 in 2016.

Lubna Qassim is a leading global lawyer, strategist and a strong advocate of governance and diversity & inclusion in the work place.

Lubna started her career in the corporate finance practice of the global magic circle law firm Clifford Chance between their Dubai and London offices for seven years. She was then asked to join the UAE Federal Government to contribute reform in a suite of economic legislations of the UAE and shape the UAE’s legal landscape.

Lubna is the first UAE National to have worked at the World Bank as the Public Sector Consultant and also at the House of Lords, Parliament of the UK.

Lubna sits on numerous boards and also appears frequently in media around the world such as CNN, BBC, CNBC and other broadcasters. She also lectures frequently at international conferences and gives tailored briefings to government leaders and corporate executives on global economic and legal trends.

She holds a Hons LLB from Brunel University in the UK and also Post Graduation Diploma from Leeds University and a Diploma in International relations from George Town University, Washington DC.

Born in the UAE, Lubna grew up between Dubai, Singapore and London. She is a global traveler. During moments away from her busy professional and personal life she enjoys reading, swimming and writing.