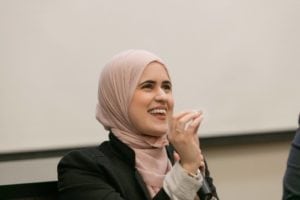 Laila Alawa is the Founder and CEO of The Tempest, the fastest-growing media company changing the global narrative of diverse millennial women. The Tempest connects millions of people daily with thousands of female thought leaders on every issue under the sun, disrupting the global media status quo. She is also the host of a critically-acclaimed podcast called The Expose. Laila presented a TedX Talk, The Secret Behind World Domination, and is amongst the 40 Women to Watch list. Since founding The Tempest, Laila has been quoted in nationwide outlets like The New York Times, The Guardian, and CNN Money as a disruptive force in media. Prior to founding the company, Laila worked at the White House and Congress, and previously served as a research specialist at Princeton University, studying socio-cognitive processing under the framework of community identity and belonging