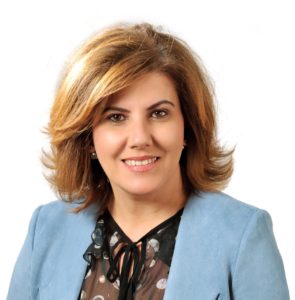 Elissar Farah Antonios is Chief Executive Officer of Citi UAE and Cluster Head for Levant & Iraq. A seasoned international banker, with extensive experience in the financial industry and the region, Elissar leads Citi’s largest and most diverse franchise in the Middle East and Africa.

Responsible for the Institutional Client Group and Global Consumer Bank in the UAE, she oversees Corporate, Investment Banking and Wealth Management services and is the Senior Executive Officer for Citi DIFC and Citi ADGM. Elissar joined Citi in 2005 as Head of Private Banking in Abu Dhabi and later served as CEO for Citibank Lebanon . In December 2015 she was appointed as CEO of Citibank UAE, and her responsibilities recently expanded to becoming the Cluster Head for UAE, Levant & Iraq.

Her banking career started in 1990 in the London office of Republic National Bank of New York as a Management Associate covering the Wealth Management Middle East Desk. She then spent several years with Credit Agricole Indosuez (CALYON) in Abu Dhabi and Dubai and with ABN AMRO Private Bank covering both Abu Dhabi and Egypt.

In her 29 years focusing on this region, Elissar has developed close relationships with a wide range of Public Sector, high net worth clients and family offices- advising, recommending, managing portfolios and providing solutions. She combines strategic thinking and market understanding with an in-depth appreciation of clients’ needs.

Elissar is active in several community service and business development organizations. She is an Advisory Board Member of the Olayan School of Business at The American University of Beirut. She is currently serving as a Board Member of Injaz UAE (Junior Achievement) and was previously on the Board of Injaz Lebanon. She was on the Steering Committee for the launch of the United Nation Global Compact Network Lebanon and an Advisory Member of the Lebanese Banking Association. Currently, Elissar represents Citi on major trade and business associations including UAE Banks Federation, US UAE Business Council, American Business Council of Dubai and Northern Emirates and is a Board Member of AMCHAM Abu Dhabi. She is also the senior sponsor of Citi’s Women Network in the UAE. Elissar was ranked by Forbes Middle East among the top 100 most powerful and influential Arab businesswomen in 2017 and 2018 , and in 2019 she was recognized among Top 20 Women Leading Top Companies in the Middle East . Furthermore, Financial News named Elissar on it’s list of the top 50 Most Influential Women in Finance in the Middle East.

Her MBA is from Imperial College in London where her thesis dealt with predicting turning points in foreign exchange. She has a Bachelor degree in Mathematics from the American University of Beirut and is fluent in Arabic, English and French.

Elissar is a mother of two Layal and Rayan and married to Assaad Antonios.