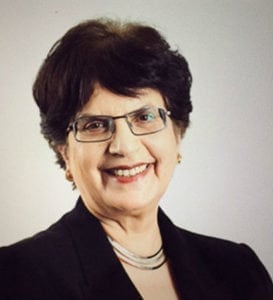 The Right Honourable the Baroness Usha Prashar of Runnymede CBE, PC is an independent member of the House of Lords and Vice Chair of the Commonwealth All Party Parliamentary Group. She has deep interest in international affairs and the Commonwealth. She is Deputy Chair of the British Council.

Baroness Prashar has led and chaired a number of public and voluntary organisations with distinction and has made significant contribution to public policy and public life in the UK. These included, among others, inaugural Chairmanship of the Judicial Appointments Commission and membership of the Iraq Inquiry.

From 2000 to 2005 she was the First Civil Service Commissioner. As from January 2019 she will be the Chairman of Cumberland Lodge. Currently she is a non- executive director of Nationwide Building Society, Honorary President of Community Foundations and the National Literacy Trust. She is a member of the Independent Review Panel to tackle barriers to building of houses established by the Chancellor of the Exchequer at the end of 2017.