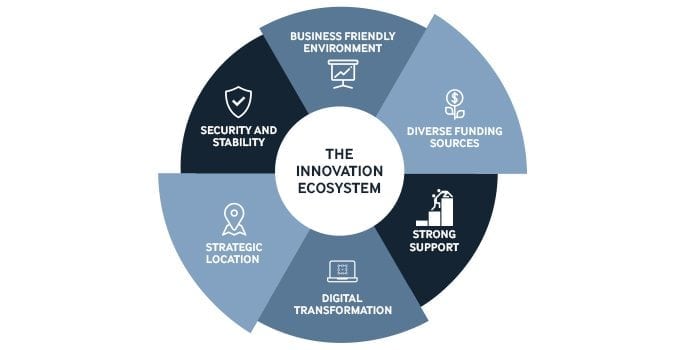 The United Arab Emirates has one of the most welcoming business environments in the world. And the government is constantly striving to make the country more welcoming to new businesses.

EASE OF DOING BUSINESS:
In its ‘Doing Business 2017’ report, the World Bank notes that the United Arab Emirates has recently made it even easier to start a business by streamlining name reservation and notarization for articles of association, as well as merging registration procedures with the General Pensions and Social Security Authority and the Ministry of Human Resources. The government has also made dealing with construction permits easier, reduced the time required to obtain a new electricity connection, and introduced compensation for power outages. Registering property is also now simpler, due to increased transparency at the UAE’s land registry.

STRATEGIC LOCATION AND STABILITY:
The UAE is known for its strategic location, serving as a gateway to the growing markets in the Middle East, Africa and South Asia. The country also offers a great deal of security and stability. It has the lowest levels of violent crime in the world, according to the 2016 Social Progress Index. The World Bank ranks the UAE in the top quarter of countries worldwide for “political stability and absence of violence and terrorism”.

DIGITAL TRANSFORMATION:
The capacity of government leaders and private organisations to spend on technology has positioned the UAE at the forefront of the region’s digital transformation. There is an entrepreneurial ecosystem in the country, consisting of a growing number of co-working spaces, incubators, accelerators, training programs, events, and networking opportunities for local and international companies.

STRONG SUPPORT:
The UAE has long attracted entrepreneurs from across the world who are looking to start a new business or scale their existing businesses. A survey of 768 regional entrepreneurs conducted in 2014 by Wamda Research Lab found that the UAE was the preferred regional destination for these entrepreneurs. Speaking to Gulf Business, Wassim Kabara, Industry Head of Retail for the Gulf region at Google said “If you want to become a regional business in the Middle East, as an entrepreneur, Dubai is the right place to start, maybe not in the first 90 days, but definitely where you’d like to end up as soon as you can afford to.”

DIVERSE FUNDING SOURCES:
By many measures, it is the entrepreneurial and financial capital of the region. The 2016 Global Entrepreneurship Index ranks the UAE ahead of every other country in the Middle East except Israel, while the 2016 Global Innovation Index ranks the UAE higher than any other Arab country. Prospective businesses in the UAE have access to diverse funding sources. The UAE’s status as the region’s financial centre makes it easier for companies to raise capital from angel investors, venture capital firms, private equity firms, corporate venture capital and family offices in the region.

According to data provided by CBI Insights, the UAE has seen a significant rise in investor activity over the past year, particularly in the tech sphere. Innovative business cases have consistently raised more equity funding deals, every single year since 2012.  The country is home to Careem Networks, a unicorn company valued at 1 billion USD. And the e-commerce company Noon.com landed 1 billion USD in funding in November 2016, with plans to begin operating this year.

The ten most active venture capital firms in the UAE have all invested in three or more growth stage companies since 2012. Based on the number of companies it has funded since 2012 – 20 in total – Wamda Capital is the most active venture capital investor based in the UAE. It is followed closely by Flat6Labs in Abu Dhabi, which primarily makes seed-stage investments and is supported by Twofour54. BECO Capital is in third places, with 12 companies funded.

The global trade corporation DP World has established the venture fund Turn8, which is considered one of the most active early-stage startup investors based in the UAE. And telecom giant STC (Saudi Telecom Company) is the anchor investor in STC Ventures, an independently managed venture capital fund headquartered in the UAE. In terms of the number of startups it has funded since 2012, STC Ventures is tied with Womena, an angel investment network for high net worth women in the Gulf dedicated to investing in early-stage companies.

MENA PRIVATE EQUITY AND VENTURE CAPITAL SUMMIT
On October 31, 2017, Naseba will be hosting the 3rd MENA Private Equity and Venture Capital Summit in Dubai, United Arab Emirates. The primary focus of the summit is to offer a deal flow platform that will introduce representatives of sovereign wealth funds, traditional PE and VC firms, regional conglomerates and family-owned businesses to innovative business cases from around the world.

Alternatively, email me at alexbnaseba.com to schedule a meeting with me.