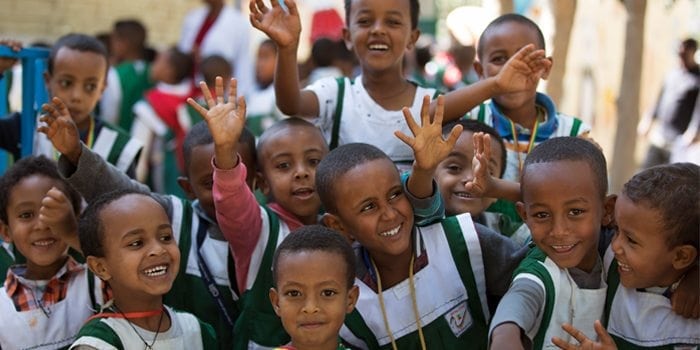 Kathryn Robinson is founder of Rainbows4Children, an independent foundation that provides education for children in Ethiopia, primarily children of adults with disabilities. Naseba will be working with the organisation in the year ahead to provide on the ground training to students and teachers.

What is Rainbows4Children and how did it come to be established?
Rainbows4Children is an independent foundation that provides education for children in Ethiopia, primarily children of adults with disabilities. However, that’s only half the story.

Max and I attended university together in the 1970s and after we re-met more than 25 years later, we established the foundation in memory of Max’s son, Nicolas, who passed away in 1996 at the age of five. Rainbows4Children launched in 2004 in Mek’ele, the capital of the Tigray region of Ethiopia. In this part of the country there are a significant number of adults with disabilities, particularly war veterans, whose children do not have access to schooling.

By selecting a city such as Mek’ele, where a further education system is already in place, we are supporting children for whom there is a long-term perspective of successful local employment, which in turn will reduce the dependency on aid and enable them to escape from the poverty trap. Mek’ele also has good infrastructure which enables access to other parts of Ethiopia by road and air.

Our patron is the renowned broadcaster and BBC journalist, Michael Buerk and, because all administration work is carried out entirely by unpaid volunteers, every penny of the donations we receive goes directly to the foundation’s educational projects.

What made you choose Ethiopia?
When Nicolas passed away, friends and family raised a significant donation in his memory, which was given mainly to Save the Children (UK) and Max had the opportunity to influence the destiny of the funds. Remembering the famine in Ethiopia 10 years previously, and hearing of Save the Children Fund’s (SCF) projects in Ethiopia, he and his wife decided to support SCF’s Ethiopian projects.

A few years later, Max and his wife had separated/divorced and we re-met following my relocation to Switzerland. In the course of our catching up we discovered a shared interest in Ethiopia. I had trekked there in 1995 and fallen in love with the country and its amazing beauty and history, and I longed to return. Max was keen to see the supported projects but anxious about the safety.

Together we worked a plan to visit with my old guide, Solomon, and the help of SCF and, in November 2002, we visited together. Max loved the country as well and felt he would like to build a school to be a memory to Nicolas.
Our guide, Solomon, was asked to help us find a worthwhile project – somewhere where we could follow progress easily with a trustworthy local partner. We were both working full time with busy careers, so we needed to use our vacation time to visit the project.

Solomon came back a few weeks later with a proposal to support the Tigray Disabled Veterans’ Association (TDVA), an organisation he had known since it was founded in 1996, and he had worked with many of their members in rehabilitation projects. We visited them in Mek’ele in 2003 and agreed to build a kindergarten with our own money for the veteran’s children. The project was successful with good project management and accurate and detailed accounting and financial reporting, so we established Rainbows4Children and continued to expand upon it. The rest is history!

How did you identify the need to help children of adults with disabilities?
When we first met TDVA in 2003, we were touched by the stories of the veteran’s children and, after we built the kindergarten, we knew we could achieve so much more together.

TDVA is a non-profit organisation with more than25,000 members, many of whom are women with no sustainable source of income.All their members have been left with a disability, from loss of limbsto blindness.

Their mission is to “extensively provide integrated development and rehabilitation services to enable people with disabilities and their family members to become productive citizens and thereby achieve equal opportunity in life”.

Education is key to supporting this goal. We believe the local community should take responsibility for the upkeep and running of the school and TDVA hascommitted to eventually taking over the running costs of the school. They will raise funds through their own endeavours, including profits from their business activities, which employ veterans whose children attend the school.

How many children have been educated at the school?
At any point in time we have 1,380 children, from kindergarten to grade 12, which is aged four to18 years in Ethiopia, a total of 15 years of education. To date, two classes of 90 students have graduated from grade 12 to university, taking the total number of children impacted to 1,560. With each graduating class, the number increases by a further 90 students and we admit another cohort to the school at kindergarten level.

For children leaving school and not continuing to further education at university level, we now have a small vocational training centre, where they upskill for jobs that are in high demand in the workplace, such as providing staff for the fast developing hotel industry. Our plan is to increase the size and build a full scale facility on a greenfield site, about 2km from the school.

Rainbows4Children doesn’t end with one school. Can you give an update on your mission to create a model which can be rolled out across the country?
Our aim is to have excellent education for the most disadvantaged children, in order to help break the cycle of poverty through education. In this, we are open to meeting and engaging with any organisation with similar ambitions, in Ethiopia and beyond.

To date, we have opened the the Nicolas Kindergarten School, Nicolas Elementary School and Secondary school including all facilities such as a library, high quality laboratories and sports facilities – andthis year we started to teach in our vocational training centre, in association with the Dutch training organisation, PUM.

Further to thisis our programme of caring for the whole child. Most of the students come from very difficult backgrounds and school is a source of care and stability in their young lives. This must be safeguarded to give them the foundations they need to become successful and happy adults.

However, our wider vision is to create a model system of education for children in Ethiopia, which is self-sustaining financially and which can be reproduced in other parts of Ethiopia and, eventually, other countries in Africa.

Why is it important to ensure that girls have equal access to education?
In Ethiopia, girls are recognised for their value and contribution to society and they have equal opportunities to further education. Of course there are still some social pressures for them to marry and have families but, in more urban environments it is also accepted that the women with the best job prospects go back to work after having children, using the resources in the extended family to look after the children, and we have examples of this among our own staff.

Ethiopia aims to be a middle-income country by 2025 and, as it nears this goal – and society continues to change – the number of women engineers, teachers and medical professionals, etc., will become more significant.
We know many older women who have risen to high levels in their professions, in regional government, academia, medicine and the third sector, through NGOs. We invite them, as well as male role models, to visit the school and talk to our students, so that they can be inspired by their stories, and continue to pursue their own goals.