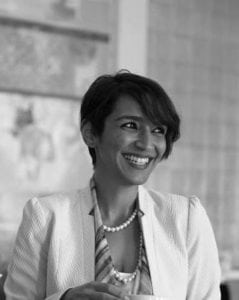 Rana Askoul is a Middle East based writer and social change advocate. Rana writes in both Arabic and English for several national and international publications on topics relating to Arab women identity, rights and social change advocacy in the region. Her writing style combines storytelling and vulnerability in the personal narrative allowing for a distinctive take on social and gender topics. Her first publication titled “So the rain won’t stop” is a collection of poems in Arabic reflecting her passions, perspectives and experiences. Rana is currently working on her upcoming book “Letters to my Father”, which examines identity, belonging and existential themes through reflections on human connections and bonds.

After a long career in senior leadership positions with Dubai Government, McKinsey and Co. and General Electric, Rana founded the Changing Pink initiative in 2012. Through her work at Changing Pink, Rana seeks to promote gender understanding and empowerment of women, men, girls and boys in the Middle East region. The initiative partners with public, private and nongovernment entities to promote gender awareness, create and implement gender empowerment initiatives and build leadership capacities of women, men, girls and boys. Her latest projects involved the creation of Tamkeen – the Leadership Program for Arab Women Scientists for the Bill and Melinda Gates Foundation, Islamic Development Bank and the International Centre for Biosaline Agriculture. Other notable clients include: Sheikh Mohammed Bin Rashid Establishment for Small and Medium Enterprises, Facebook, Linked In, Standard Chartered, Arup and The Abu Dhabi American Chamber of Commerce.

Rana is a seasoned trainer and facilitator, an accredited executive coach and public speaker. She holds a Master’s in Public Administration (UK) and a Bachelor in Business Administration (Canada). She is married and a proud mother of two.