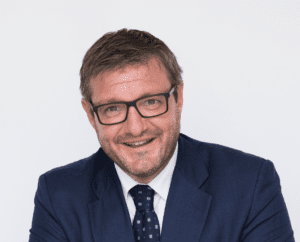 Ramses Gallego, is an IE Professor at the Human & Sciences Technology School at IE. Strategist & Evangelist at Symantec. He is also the Executive Vice President, at Quantum World Association. Ramsés is a +20 year security professional with deep expertise in the Risk Management and Governance areas. Ramsés is now Strategist & Evangelist at the Office of the CTO in Symantec, where he defines the vision of the security discipline and evangelizes on its mission and strategy. Before, he was at Dell Security and CA Technologies for 5 and 8 years respectively, he was Regional Manager for SurfControl in Spain and Portugal, and also Chief Strategy Officer of the Security and Risk Management practice at Entelgy. He is an expert of the new trends in Cybersecurity: Internet of Things, Cloud Computing and Big Data

Ramsés served for three years in ISACA’s CISM and CGEIT Certification Committees and also in the  Guidance & Practices Committee for three years from where deliverables are created for the community. He is honored to have been the Chair for ISACA’s ISRM Conference and part of the Program Committee for the events SecureCloud 2010 and 2012. He is now Immediate Past President at the ISACA Barcelona Chapter and played an instrumental role in the Planning Committee that prepared first-ever ISACA’s World Congress in Washington, June 2011. He has also been part of the ISACA’s CISM PATF Task Force.

Ramsés is a CISM (Certified Information Security Manager), CGEIT (Certified in the Governance of the Enterprise IT) and a CISSP (Certified Information Systems Security Professional). He is the proud owner of the SCPM (Stanford Certified Project Manager) from Stanford University, California, one of the first experts with the CCSK (Certificate of Cloud Security Knowledge) and also an ITIL and COBIT Foundations certified professional. He develops results-oriented, business-focused, people-driven projects due to his Six Sigma Black Belt accreditation. An internationally recognized public speaker, has visited +24 different countries in the past 12 months and has been awarded ‘Best Speaker’ many times. He received the John Kuyers Award for Best Speaker/Conference Contributor in June 2013. He has been named ‘Privacy by Design Ambassador’ by the Government of Ontario, Canada and is proud of being Past International VP for ISACA’s Board of Directors. He feels honored of having had the US flag flown on his honor in The Capitol on November the 1st, 2013. He lives in Barcelona, Spain, with his wonderful wife and his two loved kids.