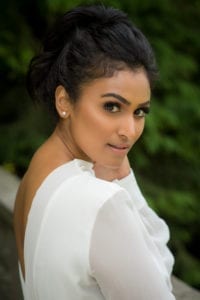 Nina Davuluri is an acclaimed host, speaker, advocate & entrepreneur. Nina first gained international recognition by becoming the first Indian American and South Asian to become Miss America 2014. Her most recent venture combines the network she has cultivated, her love for advocacy, and disrupting global beauty standards with the launch of her innovative skincare line, aavrani. Raised in a culture sensitive to skin tones, Nina was hyper-aware of the skin lightening industry and how it dramatically influences beauty standards. Through advocating for diversity and encouraging others to embrace their identity, she knew it was important to deliver a skincare product that champions everyone to feel proud and confident in their skin, regardless of their complexion. Core to the essence of aavrani is female empowerment–in Hindi “Rani” means “Queen”, and through her continued advocacy work, Nina’s mission is to help empower others. Through aavrani’s social impact partnership with the Shanti Bhavan school, the company provides children in India with access to education and mentorship.

In terms of hosting, Nina is no novice to the television and media industry. She is the host & producer of the reality show, “Made In America,” which made its series premiere August 2017 on ZeeTV Americas in North America. The premise of the show is to help young women break their own perceptions of beauty and stereotypes as they embark on a new journey to fulfill their dreams in America. Through her experiences as Miss America, she realized how much of a need there was in the marketplace for this type of content to be created for young South Asian millennials.

She has been featured on CNN’s Outfront with Erin Burnett, Anderson Cooper 360, LIVE! with Kelly & Micheal, Fox & Friends, The View, MSNBC, The Arsenio Hall Show, NPR, BBC World, The Wall Street Journal, The New York Times, The Washington Post, Canada’s Breakfast Television, and The Morning Show, among many others local media outlets both national and international.

Since serving as Miss America 2014, Nina has logged approximately 500,000 miles traveling across the world to address an array of audiences on her platform: “Celebrating Diversity through Cultural Competency.”  As part of her consciousness-raising efforts on behalf of diversity, Nina also launched a social media campaign, #CirclesOfUnity, to encourage constructive and civil dialogue on diversity issues. Through her social media channels, Nina asks people to share “representative thoughts and stories about their experiences on how we as a nation can advance cultural awareness.” Nina is proud to have spoken at almost 40 different universities including Harvard, Princeton, Yale, Duke, University of Pennsylvania, Cambridge University (UK), and the Indian Institute of Technology (IIT) in both Bombay and Hyderabad, spreading her message of inclusion. Nina has also taken her platform internationally, speaking in the United Kingdom, Philippines, Canada, Kenya, and India.

In addition to her personal platform, Nina also partnered with the U.S. Department of Energy and the U.S. Department of Education promoting women in STEM (Science, Technology, Engineering, and Math) related fields. She has worked with top technology companies such as Google, NASA, Dell, & Texas Instruments in addition to the Sacramento Kings Foundation to further their women in STEM initiatives. Furthermore, she has worked with many charities/NGO’s in the U.S. and India advocating for equality and education–most notably Pratham, Magic Bus, Akshaya Patra, and Girl Rising. With her Indian roots and heritage, Nina was the first choice by Indian Prime Minister Narendra Modi’s office to be the emcee for his historic Madison Square Garden reception in 2014.

Nina’s work in advocacy became apparent when she was first recognized by President Barack Obama and former First Lady Michelle Obama. In April of 2014, she was invited to collaborate with the First Lady on her campaign, “Let’s Move.” She then went on to help launch “Act to Change,” an anti-bullying campaign led by the White House Initiative on Asian Americans and Pacific Islanders (WHIAAPI). In July of 2015, Nina was invited to be a speaker at the Global Entrepreneurship Summit in Kenya during President Obama’s historic first visit. She was honored to be the youngest speaker on the main stage sharing her experiences as an entrepreneur & trailblazer in the field of diversity. In March of 2016, Nina embarked on a fourteen day tour in India that was sponsored by the U.S. Department of State promoting education, women’s empowerment, and diversity. Nina was incredibly proud to return to the her homeland of India and focus on key issues between both countries. The tour culminated in an invitation from President Obama to the last Women’s History Month reception held at the White House when he served his final year in office.

Nina is humbled by her experiences and excited to continue her journey in the hosting, advocacy, & entrepreneurial arenas. When she isn’t on a flight, you can find her in Manhattan most likely brunching outside with her rescued pup, Dobby!