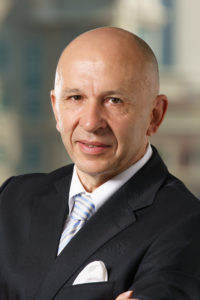 Luciano Poli is President of Dow Chemical India, Middle East, North Africa & Turkey, a role he was appointed to in August 2017. Based out of the company’s regional headquarters in Dubai, Poli is responsible for driving the region’s growth strategy and further enhancing Dow’s leadership position. Poli also continues to have a strong focus on promoting a culture of innovation, customer-centricity, inclusiveness and sustainability across the organization.

In 2006, Poli was Area Finance Director and CFO for Dow Asia Pacific and in 2010 took on Europe, Middle East and Africa. He was responsible for overall finance activities in this region, including treasury, controller, tax, M&A, investor relations, corporate risk management, insurance and strategic planning. He is also a member of the Ethics & Compliance Committees, Pension Fund Board and key Dow Joint Venture Boards.

In 2012, Poli relocated to Saudi Arabia and served as Chief Financial Officer of Sadara Chemical Company (Sadara), the largest chemicals complex ever constructed in a single phase with 26 chemicals units. In addition to the role he played in the formation of Sadara, Poli was instrumental in implementing Dow’s strategy in the Middle East and Asia Pacific via Joint ventures, key petrochemical projects and various M&A transactions, including the EQUATE and Siam Cement/Dow expansion, and the MEGlobal and Equipolymers formations.

In August 2014, Poli returned to Switzerland as Global Finance Leader for Joint Ventures and Area Finance Director for EMEA. In this role, he worked closely with the Joint Venture Governance Team, the businesses, functions and geographies to accelerate Dow’s joint venture portfolio strategy. In addition, Poli assumed area finance responsibility for EMEA.