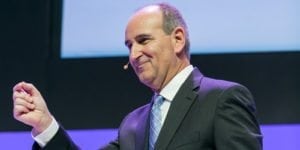 John is widely regarded as one of the world’s leading authorities on leadership, talent and culture. He is a respected advisor and coach to Fortune 1000 CEO’s and senior leadership teams on how to create and sustain a leadership and talent culture that drives superior operating results.

John is the author of eight books including three best-sellers and he has been recognized by The Thinkers 50 and Globalgurus.com as one of the world’s top ten leadership authorities and executive coaches. Recently, John was honored by his executive coaching peers (The Association of Corporate Executive Coaches), with the prestigious 2015 International Executive Coach Thought Leader of Distinction Award, in recognition of his thought leadership and his work as a global executive coach.

John serves on the Executive MBA Faculty at Florida Atlantic University as well as the executive education faculty at ZfU International School of Business in Zurich, Switzerland, and he was recently appointed Distinguished Senior Fellow of one of the world’s top-ranked business schools The Hult International School of Business. John is regularly featured in the Wall Street Journal, Fast Company, Fortune Magazine, The CEO Magazine, and on television.