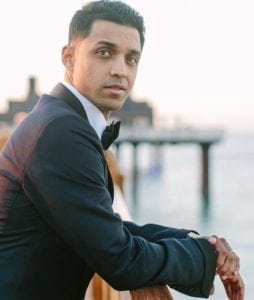 Chris Fernandez is the founder and CEO of Block Gemini, the Middle East’s leading provider of enterprise-ready solutions for blockchain, ICOs, IoT, A.I. and decentralized applications.

A seasoned technology entrepreneur, investor and all-round geek, Chris has been active in the blockchain development space since its infancy more than five years ago. With more than 25 years experience in digital media and technology, Chris recognized the power and potential of blockchain and as an early adopter has seen returns of more than 25,000% on his digital currency portfolio.

In late 2016, Chris launched Block Gemini, focusing on blockchain-based enterprise solutions for large scale industries. Leveraging his access to the blockchain community and his understanding of enterprise-level business needs, Chris utilized his relationships with the likes of Sergey Petkevich (Ethereum & Hyperledger expert) and Kanat Tulbassiyev (Hyperledger expert) to assemble an all-star team of blockchain developers.

Block Gemini now boasts an exciting combination of Ethereum & Hyperledger developers, blockchain consultants, crypto researchers, programmers, developers, analysts and designers – all true professionals in their respective field. The team grew from two people and a vision to over 50 full-time staff in Dubai in less than eight months.

Offices in Estonia and Gibraltar are also in the pipeline. In line with the blockchain vision of the Dubai Government, Block Gemini hopes to lead the blockchain revolution within the region.

Chris’ journey in IT began at the tender age of eight, at the outset of the internet. Born in Dubai and raised in Toronto, Canada, his father’s work as a computer administrator for the Canadian government exposed Chris to Unix and programming languages that let him experiment with tools like HP Irix and Dbase at an expert level as a child.

Chris was one of the offspring of the dotcom boom and he started his first online business at the age of 15, eventually receiving seed funding from a networking pioneer. This gave him the foundation to harness his entrepreneurial instincts at a young age, founding and self-funding what would become several different businesses in the digital media and technology space and contributing to the evolution of the online advertising and web hosting industries. He also has a successful real estate portfolio in Dubai and abroad.