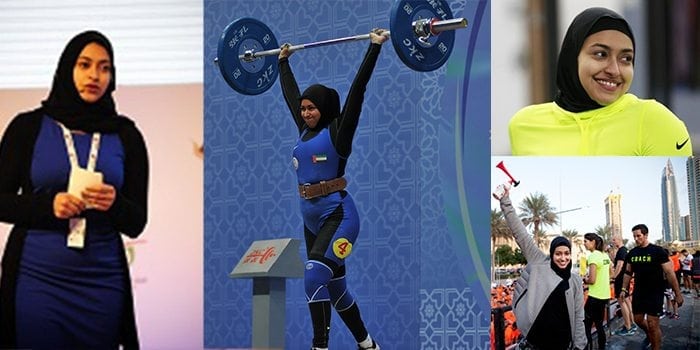 Ms. Al Haddad is a former journalist and an Olympic weightlifter. She is the first hijabi athlete to compete in Crossfit and Olympic weightlifting in the Middle East.After being introduced to Crossfit in 2011, she made history as the first Emirati, GCC national and Arab female to compete in the Reebok Crossfit Games Open in 2012. In 2015, she competed at the IWF Asian Interclub Championship, where she won six gold medals and three silver medals. In 2016, she represented the UAE at the Asian Championships.

She has been featured in three global Nike campaigns: “Better for It”, the launch of the Arabic NTC app, and “Inner Strength – Raising the bar”, a documentary film with a reach of 10 million viewers.

Al Haddad’s first public speaking engagement was at a TedX event. She has been represented in over 100 interview and media outlets over the past five years, including two documentary films showing in the UK and the US. In 2016, she won the Femina Middle East “Unstoppable” Award.

Ms. Al Haddad studied Mass Communication and Journalism, with a minor in Psychology, at the American University of Sharjah.  She is currently writing a book.

Her advice for those following in her footsteps? “Keep fighting for your goals, and know for a fact you will be a rejected a lot, but don’t let that stop you,” she says.

We recently caught up with Ms. Al Haddad for an interview ahead of her participation at the 18th Global WIL Economic Forum. Her responses provide personal, in-depth insight into her daily life as leading female Arab athlete

A lot changes in 6-7 years. The best advice that I could give to my 20-year-old self is: Don’t worry. Everything happens for a reason, when it should and when it’s meant to be for you. Nothing that happens to you in life is by accident. Everything that you will deal with in the next few years is preparing you for something big, then bigger. The harder it gets, the more you’ll grow. The tougher it gets, the tougher you’ll get. Be emotionally resilient and rely on your guts. It is the reason you are a game-changer.

I never understood the role of a role model until I became an athlete. I never looked up to anyone in particular because I wasn’t aware of seeking mentors or learning from others’ experience. It wasn’t until I was put in a position where I became a role model to others that I have sought people who I can look up to. I first and foremost look up to my mom and her strength. I also have a few mentors who are entrepreneurs in education, business and sports – like Wael Al Sayegh, Lisa Labonte, and Kusloom Abduallah.

The role chose me before I chose it. I know that I have become a role models to others – both men and women – who have contacted me from across the globe about being a Muslim female athlete. My responsibility is to show that you can change your direction in life, whenever you want. You are the leader of your story, and obstacles are opportunities hidden waiting to be unlocked. It will take guts, it will take rejections, nay-sayers, and negativity, but in the end you’ll rise. You’ll be the one on top of the mountain, and then you can be that person that people go to and ask “how?”, instead of “why?”

“NEXT!” That’s my attitude. Not everyone I meet or talk to will meet me at my wave-length, or understand my vision and goals. If I get rejected or things fall through, I have the mentality and attitude that something better is in store for me. That has never failed me.

Myself. I write little notes all over the room to keep my spirit up during the good or the bad times. Having positive people who support you is important for your overall success; that said, aim to always be the driver, pilot and lead of your own story. As an entrepreneur, being a self-starter is a skill – it is no different when it comes to being your own motivator. How can you motivate others, if you cannot motivate yourself first?

Coming up blank here! I like my world as is!

Not so much treated differently as having access to limited opportunities. And it is not so much about being Muslim as it is about being a covered athlete. Finding opportunities to work with companies has been difficult in terms of funding and partnership. For a very long time, I had to prove through actions, competitions, and overall achievement that I have something to offer the world.

Many times I was rejected for no reason, despite being a pioneer; told I will be supported, only to never hear back from those who said they would. Generally female athletes have to work twice as hard to get half of what male athletes get in terms of funding and sponsorship, because we are not viewed as serious or as fierce. This is particularly true for a covered female athlete in the Arab world.

I am so grateful to the companies that stepped in to support me through products to help my training and raise my profile – and I do hope that more companies step up to empower us further, financially.

I had to put everything on hold – income, relationships, marriage, social life – but in return my story has inspired the world and made it a better place through the personal sacrifices that I had to make. I travelled the world to compete and made sure to spread a positive message about Islam and women in the Arab world. It was not an easy 4 years of my life, but I knew if I stick with it till the end I would come out of it a better human who contributes significantly to the world.

To motivate, educate and inspire youth and women on health and wellness across the country and globally; focus on sport and physical education to improve the level of the athletes in the country, not just in terms of athletic talent but also psychologically, emotionally and spiritually. I am discussing partnerships with a number of sport entities and companies to further improve their strategies for sporting events, leadership and women empowerment as a consultant.