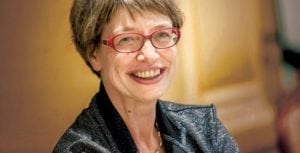 Sylvia Metayer has been CEO Corporate Services worldwide and a member of the Group’s Executive Committee since 2015.
Sylvia first joined Sodexo in 2006 as Group Financial Controller, and was later appointed CFO for Sodexo’s On-Site Services operations in Europe, taking an active part in the preparation of large, complex tenders. From 2010, prior to her current role, Sylvia Metayer headed up Sodexo’s International Large Accounts, developing Sodexo’s key Corporate clients Procter & Gamble, GlaxoSmithKline, and Johnson & Johnson.
In her current role as CEO of Sodexo’s Corporate Services segment, Sylvia heads up a global team of 120,000 employees, whose mission is to improve the quality of life of adults at work across over 60 countries. Sylvia began her professional career as an auditor
in the Paris office of Arthur Andersen before going on to hold key financial positions in leading international groups. Before joining Sodexo, Sylvia was Chief Operating Officer at Houghton Mifflin, a Boston-based educational publisher. Sylvia is a trustee of the Quebec Labrador Foundation, a member of the European Professional Women’s Network and of HEC au Féminin, and serves on the Research Orientation Committee at HEC. Within Sodexo, Sylvia is a founding member of SWIFT, the Group’s women network, and is a sponsor of PRIDE, Sodexo’s LGBT network.
Sylvia holds a business degree from the French Ecole des Hautes Études Commerciales (HEC). She’s also a graduate of Queen’s University, Canada and of the University of Ottawa, Canada.
Sylvia is French/British/Canadian, and speaks French and English.