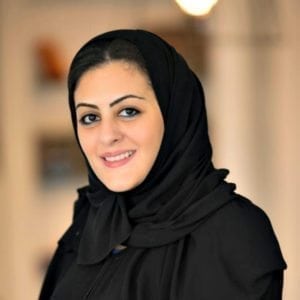 An accomplished lawyer, social entrepreneur, and a WEF Young Global Leader, Sofana Dahlan is an exemplary individual whose core competency lies in identifying gaps and developing programs as creative solutions that have a socio-economic impact. Currently, Dahlan is serving as the Vice Governor for Entrepreneurship Advancement at the Small and Medium Enterprises Authority of Saudi Arabia, making her the first Saudi female senior economic policy-maker.
She is the founder of many social enterprises and initiatives that focus on developing the creative industries in the Saudi Arabia such as Tashkeil, Kayanspace and the Saudi National Creative Initiative (SNCI) and holds the prized distinction of being among the first three female lawyers to have been granted the permit to practice law in Saudi Arabia. She has served as a legal consultant in different parts of the Arab world including Saudi Arabia, Lebanon, and Kuwait.