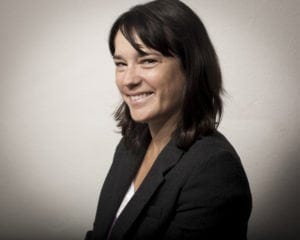 After 15 years in leadership positions at global corporations, Sandrine moved to the strongest side the force to become an entrepreneur. Sandrine is the CEO and co-founder of Cosmian, The Personal Data Network. Powered by peer-to-peer and blockchain technologies, Cosmian is the reference for personal data control & access, while favoring sustainable economic models for publishers and brands.

Sandrine began her career in 1995 at Procter & Gamble. In 1999, thrilled by the emerging potential of the Internet, she switched gears and joined Microsoft’s MSN consumer division. In 2004, Sandrine joined Google and exercised responsibilities as Southern Europe Marketing Director.

In 2010, she co-created her first company, Spring Lab – a strategic consultancy in business innovation and digital transformation. Sandrine then joins Connecthings in 2015, a leading Smart City mobile engagement services, as Managing Director.

Sandrine is deeply involved in supporting women’s entrepreneurship and a strong advocate for women in tech.

Sandrine holds a BA in Biotechnologies from INSA Lyon and a HEC Paris Master in Entrepreneurship. Sandrine is a 2004 Kellogg School of Management MBA graduate.