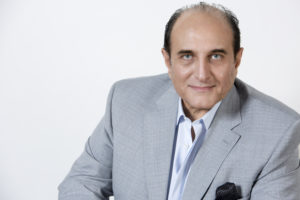 As the founding CEO of Emirates Integrated Telecommunications Company (du) since 2005 in the UAE, and the founding CEO of Egyptian Company for Mobile Services (Mobinil) in Egypt from 1998 to 2005, Osman Sultan set during the course of his career several strategies translating the profound transformations that the telecom and information sectors have been creating in our lives.

As an influential figure and a mentor in the telecommunications sector, he is proud to have groomed close to 20 talented individuals who became CEOs of various operations across all continents.

Osman Sultan is a visionary leader and a notable public speaker in the field. His distinguished achievements ranked him as one of the most powerful executives in the telecoms industry in the world twice on “GTBPower100 List” in both 2010 and 2011.

Osman Sultan brings 35 years of leadership, rich with achievements in the telecom business. His vast knowledge and expertise in the field as early as the pre-internet period, placed him as one of the pioneers in France, Europe, the USA, Japan and the entire MENA region.

As an industry veteran, Osman Sultan witnessed the birth of the “Minitel” ecosystem in France since late 1983; a stage that a lot consider the precursor and the incubator of the internet universe. This is when he had the certainty that connectivity will disrupt profoundly the lives of individuals and corporations allowing much more than the traditional status of talking or sending/ receiving messages.

The impact of mobility saw a paradigm shift in his journey when he launched “a mobile in the hand of everyone” slogan in 1998 in Egypt, as the founding CEO of Egypt’s first mobile operator “MobiNil;” a subsidiary of France Telecom/Orange.
In 2006, Osman Sultan established, as founding CEO, the UAE’s second integrated telecom operator EITC, operating the very innovative brand “du,” where he was driven by his profound belief that “being connected” was becoming a “basic human right.”

Since then, Emirates Integrated Telecommunications Company has grown beyond connectivity offering all fronts of the digital transformations, end to end ICT solutions for enterprises, comprehensive platforms for smart cities (as a strategic partner for Smart Dubai Office) to realize Dubai’s ambition to be the smartest and happiest city in the world. The most recent endeavor was EITC’s launch of the Virgin Mobile in the UAE, as the fully digital B brand. In addition, EITC offers services catered for consumers embracing various aspects of their digital lifestyle of today.

Osman Sultan was, along his career and still is, a board member of various institutions in the telecom industry, technology space, and academic world. This includes board memberships of Tunisie Telecom, Malta Telecom (currently GO) in Malta, the National Telecommunications Institute (NTI) in Egypt, The Supreme Committee for Corporate Governance in the Egyptian Stock Exchange (back in 2000), the advisory board of the Mohammed bin Rashid School of
Communications (MBRSC), the Global Blockchain advisory Council of the WEF, The Board of Endeavor UAE and many others.

All industries are currently going through a profound transformation, one that is enabled by the acceleration of capabilities offered by technology. The astonishing disruption induced by social networks and is driven by the quest of finding economically viable ecosystems.

Osman Sultan is currently focusing on establishing the right platforms to allow the emergence of the new conversations needed for these ecosystems tackling the intersections between the technological, economical and societal dimensions to make way for a more technologically efficient and humanly rewarding future in the midst of all these rapid changes.

Osman Sultan is a father of five children. He doesn’t believe that our current world and social interactions allow boundaries between personal and professional lives. He is fond of Cinema, Arabic literature and poetry, and a passionate reader of the architecture of the new ecosystems in the Brave New World we live in today.