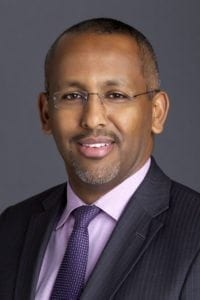 Menassie Taddese is the Regional President, AfME, Pfizer Essential Health. Prior to this role, he served as Regional Lead for Pfizer Innovative Health in AfME.  In both roles, he was instrumental in turning around the holistic performance of Pfizer rooted in establishing a winning and organizationally healthy culture.

Mr. Taddese began his career with Pfizer in 1997 in the Finance Division and held a series of global roles of increasing responsibility in General Management, Treasury and Corporate and Business Finance.  This included serving as the General Manager for Pfizer South Africa before becoming CFO for Pfizer Latin America.  In 2011, he joined Primary Care where he was the VP and CFO for Pfizer’s largest business, generating $13 billion in revenue and managing investments of nearly $3 billion.  Complementing his deep experience in the US, Mr. Taddese has significant  international and emerging markets experience having led teams in Latin America, Africa, Middle East and Europe.

Mr. Taddese was selected as a 2015 Emerging Leader by PharmaExec.  He also served as the Chair of the Global Blacks Council at Pfizer and sponsored numerous related efforts in helping to advance Pfizer’s diversity and inclusion objectives.  Mr. Taddese holds a bachelor’s degree in Economics and Accounting from Virginia Tech and an MBA in Finance from The Smeal College of Business at the Pennsylvania State University, where he graduated with distinction.  He currently resides in Dubai with his wife, two daughters and son.