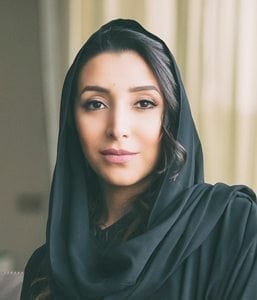 Marriam Mossalli is the founder of Niche Arabia, a luxury consultancy firm, advising brands on the Saudi and global market and offering expertise in strategic planning, communications, and implementation. Niche Arabia has earned international recognition for its innovation, especially for the role it has played in elevating the Saudi fashion industry by working with local and international clients by executing community engagement events.

Marriam established the “Life & Style” section of Arab News–the leading English daily in the Middle East, a little less than a decade ago. She is a former news journalist and features editor, and continues to contribute to international titles such as, Harper’s BAZAAR Arabia, Marie Claire Arabia, and Hia Magazine. She has also co-authored a market insight book, called “Glamour Globals,” and published a book on the fading crafts in the rural Asir region of Saudi Arabia. Marriam has been interviewed by the likes of CNN, Al Arabiya, and MBC, and is often called upon an expert in the luxury and creative industries.

Marriam’s position as a pioneer and ambassador for the Middle Eastern fashion industry was cemented with an exclusive invitation from standing First Lady Michelle Obama to the “Celebration of Design Gala,”as the only Arab professional, setting her apart from her colleagues.

Belonging to a generation of Saudi women who have broken new ground in their professions, Marriam has been invited to represent the Kingdom in several international events; including the CULTRUNNERS Public Storytelling Symposium, a joint venture between Art Jameel, Edge of Arabia, and MIT’s Program in Art, Culture, and Technology, and Under The Abaya, a series of talks in Los Angeles in collaboration with King Abdulaziz Center for World Culture and the Middle East Institute. In addition, she has mediated numerous talks around the Gulf on several anticipated events such as Mediaquest Corporation’s annual Arab Luxury World and Simply Stylist.