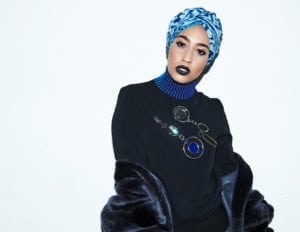 Mariah Idrissi is a force to be reckoned with. Described as “The Face of a generation” Mariah was the first hijab wearing model to be featured in an international fashion campaign for H&M, a bold move for the brand which saw both Mariah and H&M make headline news as the campaign went viral and propelled Mariah into the spotlight globally. Mariah grabbed her newfound fame with both hands and along side her modeling career has forged a role for herself as the voice of her community, a leading authority on “Modest Fashion” as well as using her fame for good by supporting many humanitarian causes.

Public speaking is a keen part of Mariah’s repertoire alongside her passion for spoken word performance, Mariah speaks both corporately and publicly at events such a TED.

Watch this space closely, Mariah is changing the game.