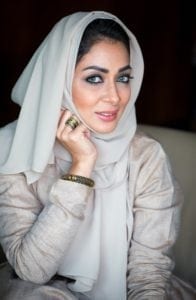 Maram Kokandi is the General Manager of Park Inn by Radisson Jeddah Madinah Road, in Saudi Arabia and part of the Carlson Rezidor Hotel Group. Maram oversees all aspects of the hotel operations and is responsible for driving its financial performance.

Saudi national Maram recently made history by becoming the first Saudi female General Manager in the hospitality industry. Maram was appointed as General Manager for Park Inn by Radisson Jeddah Madinah Road, which is set to open in Q1 2018. The 84 room midscale hotel is part of the Group’s expansion across Saudi Arabia.

Maram started her career in hospitality working for international hotel brands in Jeddah as a sales manager. In her role at Rosewood Hotel in Jeddah, Saudi Arabia she was part of the hotel pre-opening team progressing to corporate sales manager covering banking, financial, and Government business. Maram then moved to be become Area Sales Manager for luxury property Raffles Hotel in Dubai where she was Area Sales Manager and responsible for sales and marketing for the western area of Saudi Arabia.

Maram was then awarded a prestigious international scholarship to study hospitality management in the United Kingdom. Following her successful graduation, Maram joined the commercial function of renowned Dubai based real estate developer Emaar before taking up the historic new role with the Carlson Rezidor Hotel Group.

As a passionate supporter of empowering women, Maram has championed greater participation of females in the workplace in Saudi Arabia, in line with the Saudi Government’s Vision 2030. She was recently recognized by the Worldwide Hospitality Awards and collected the “Best hotelier” award.