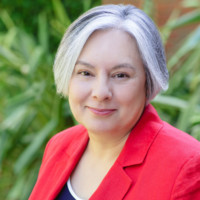 Leonor Stjepic is a British charity entrepreneur, CEO and mentor.  From a family of Spanish refugees, she has spent most of her life working with NGOs – either as a volunteer or professionally.  Currently in her third CEO role as Chief Executive of the Montessori St Nicholas Charity and Chair of its training college, Montessori Centre International.

Leonor Stjepic was born in 1962 in London, to a family of Spanish refugees who fled Franco’s Spain.  She grew up bi-lingual in Spanish and English.  The strong influence of her uncle, Spanish writer and activist Agustin Roa Ventura, lead Leonor to become involved with Amnesty International at the age of 18 and, as a volunteer, she co-founded Amnesty International’s Working Group for Children with Alan Grounds, campaigning for children who were victims of torture or imprisoned for the non-violent political actions of their parents.  At the same the Working Group successfully campaigned for Amnesty International to take on children’s rights as part of its mandate.

Work in the private sector

Leonor’s first part of her career was spent in the private sector.  She has worked for a packer and shipper of antiques and works of art; a Mexican merchant bank; the record company Decca; and an academic publishing company.  Following that Leonor ran her own consultancy company, supporting SMEs with growth and change, in the UK and in Spain.  She was also a partner in an art gallery in Knightsbridge, London.

Work in the NGO sector

Throughout her career in the private sector, Leonor volunteered with a number of national UK and international charities, and this culminated in working as a volunteer with children and women victims of the war in the Balkans, during the war that followed the break-up of Yugoslavia.  It was there that she met her husband.  Coming back to London, Leonor started working with Fields in Trust (then National Playing Fields Association).  Following that she worked for Index on Censorship before becoming the first Executive Director of the Galapagos Conservation Trust.  Her next CEO role was as Chief Executive of medical research charity, RAFT.  During her time at RAFT, she was helped set up life sciences company, Smart Matrix Ltd, and was its CEO for five years, whilst concurrently serving as CEO of RAFT.  Under her leadership both organisations won a number of international awards.  In June 2018, Leonor took up her third CEO role as Chief Executive of Montessori St Nicholas Charity.