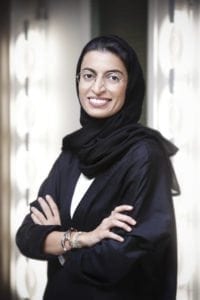 Her Excellency Noura bint Mohammed Al Kaabi was appointed as the UAE Minister of Culture and Development in October 2017. Prior to this, she served as the Minister of State for Federal National Council Affairs from February 2016. In this role, H.E. Noura Al Kaabi acted as the key link and facilitator between the Cabinet and the Federal National Council.
Noura is Chair of the Media Zone Authority – Abu Dhabi (MZA) and twofour54, the home of media and entertainment in Abu Dhabi; Chair of Abu Dhabi National Exhibitions Company (ADNEC Group) and Chair of Abu Dhabi Media Company. She is also the Media & Marketing Chair for the Special Olympics. She is on the committee of TCA’s Museum Acquisition Committee and is part of the Advisory Board for Abu Dhabi Music and Arts Foundation and Qasr Al Hosn. She is also a board member of the UAE’s National Media Council, International Federal Council, Image Nation, National Archive, Fatima Bint Mubarak Ladies Sports Academy, Zayed Sports Council and Young Global Leader. Noura is the first UAE National to be ranked on Foreign Policy magazine’s ‘Top 100 Global Thinkers List’. In 2014, she was named as one of Forbes Middle East’s 30 Most Influential Women in Government; and was awarded ‘Business Woman of the Year’ at the Gulf Business Industry Awards. Her role in growing the UAE’s media industry was recognised by America Abroad Media in 2015; and she was named as one of the 20 most powerful women in global television by The Hollywood Reporter in 2016.
H.E. Noura Al Kaabi holds B.A. in MIS from UAE University and has also completed the Executive Leadership Programme from London Business School.