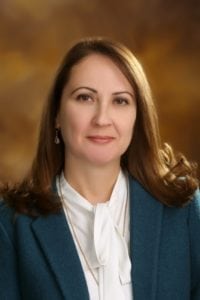 Ms. Ali served as Minister of Industry, Trade and Supply in 2015/2016. She worked at the Trade Ministry since 1998, served at Jordan’s Permanent Mission to the UN in Geneva in 2002, and was appointed as the Ministry’s Secretary General in 2010. She has a BSc in Industrial Engineering, an MBA and a Trade Policy Diploma.

During her ministerial service, Ms. Ali was ranked the 8th most powerful Arab woman in government by Forbes Middle East/2015. She has a broad experience in international trade, industrial and trade policies. She was a member of the negotiation teams for Jordan’s accession to the World Trade Organization and Jordan’s Free Trade Agreements with the US, Singapore, Canada, and Turkey.
Ms. Ali was awarded the Royal Medal by His Majesty King Abdullah II of the Third Order in 2008 and of the Fifth Order in 2000. In 2016, she received the Governor General’s Medallion by the Right Honourable David Johnston Governor General of Canada in appreciation of efforts exerted in fostering greater ties between Jordan and Canada.