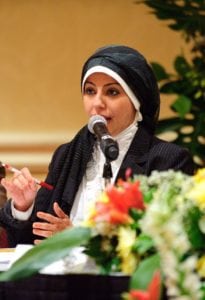 Dr. Mody Alkhalaf holds a PhD in Applied Linguistics from Princess Norah University. She started her career as professor of linguistics and has taught women over 12 years before being appointed Director of the first female scholarship office at the Ministry of Higher Education in 2007.

In 2008, she took on the position of Director of Cultural and Social Affairs at the Saudi Arabian Cultural Mission in the United States. She was then appointed Assistant Attache for Cultural and Social Affairs at the Royal Embassy of Saudi Arabia in Washington DC, and became the first Saudi woman to hold that senior diplomatic position.  In this position, Dr. Alkhalaf promoted positive cultural outreach by Saudi students residing in the US and managed to grow the number of student organizations at American universities from 40 to 300. Until her post ended in 2015, she also supported students in need of any social or legal assistance during their period of study in the USA.

In 2015, Dr. Alkhalaf opened the first Saudi restaurant in the Washington DC metropolitan area with the aim of promoting Saudi cuisine and culture. Six months later, “Aldeerah” was named one of the top 50 restaurants in the area.

In 2016, Dr. Alkhalaf was appointed to the Saudi Shura Council. This is the second time in history that Saudi Arabia appoints women to the Shura. One year later, she was elected as Vice-chair of the Foreign Affairs committee in the Shura council.

Throughout her career, Dr. Alkhalaf has been an adamant advocate for women’s rights in Saudi Arabia. She has written on the topic for Arab News and is an active speaker on issues facing women in Saudi Arabia as well as the progress they are making. Through the Shura Council she continues to advocate for women’s rights, human rights, and rights of those with special needs.