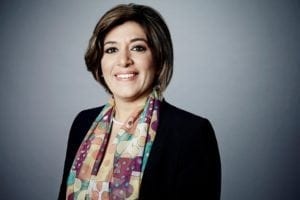 Caroline Faraj, VP Arabic Services, joined CNN in 2001. Since then she has overseen the content and management of the CNN Arabic site, which she launched in 2002. In 2014 she led the site’s comprehensive re-launch to embrace rapidly evolving consumer needs.
Based in Dubai, she has overseen CNNArabic during a time of great regional upheaval, over a period which has encompassed the US-led invasion of Iraq, the Arabic spring and the rise of Islamist militant group ISIS.
Before joining CNN, Faraj’s previous roles included senior political reporter for Al Rai – the leading Arabic daily newspaper in Jordan, managing editor for English-language newspaper the Jordan Times and regional correspondent for the US Defense News. She has also help position in London for Dubai TV and in Jordan for Bahrain TV. She also conceived and hosted Jordan’s first morning television talk show Youm Jadid.
Faraj was born in Amman, Jordan. She has a bachelor of arts in Journalism and Mass Communications – radio and television from Yarmouk University in Jordan and a master of arts in International Journalism from City University in London. Faraj is fluent in both Arabic and English.