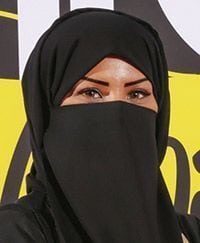 Al-Zahran trained as a legal consultant for three years, representing dozens of clients in family disputes, criminal and civil cases. Her initial focus was domestic violence, but she later studied the cases of financial and criminal prisoners.

In May 2013, Arwa Al-Hujaili became the first trainee woman lawyer in Saudi Arabia. In November 2013, Al-Zahran became the first woman lawyer in Saudi Arabia’s history. The other three women to follow Al-Zahran were Sara Aalamri, Jehan Qurban and Ameera Quqani. Prior to the licensing of the Saudi women, female law graduates were only allowed to serve as legal consultants.

On January 1, 2014, Al-Zahran founded Saudi Arabia’s first all-woman law firm. She said that the purpose of her law firm was to bring Saudi women’s problems before the court and to fight for their rights. Mazen Batterjee, Vice President of the Jeddah Chamber of Commerce, attended the firm’s opening, congratulating the women while cautioning them to follow Sharia law and court restrictions requiring that women wear hijab.

Featured in Arabian Business as the 7th most powerful Arab woman in its 2015 and Fortune magazine’s 2015 list of the world’s 50 greatest leaders.