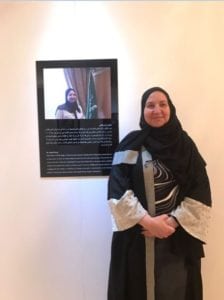 Dr. Amal Fatani is a Board Member of Saudi Human Rights Commission and has
represented last year Saudi Arabia at UN High Commissioner for Human Rights in Geneva,
the Arab League in Bahrain and the Commission for status of Women at the United Nation
in New York.
She also holds Consultant position at TATA Consulting Services (TCS) The All Women
Business Process & IT Services Center, Riyadh, KSA, set up by Saudi Aramco and Joint
venture between TCS and General Electric where she helped grow it from 400 when she
joined to almost 1000 females employees as of 2017. Prior to working at TATA she served as
Consultant and General Supervisor of Female Affairs at the Ministry of Education- Higher
Education. She participated in a variety of National committees and represented the
Ministry in several international Events. Dr. Fatani set up, managed and ensured growth of
female Centers at the Ministry plus King Saud University (KSU). In the latter she was
appointed Chair Person of Female Pharmacology and Toxicology Department, going on to
becoming the first Vice Dean of Female College of Pharmacy, then serving as the first Dean
of the Female Center for nine Scientific and Medical Colleges, setting up the Female Sections
in all Sectors in the Ministry of Higher Education.
She was a founding board member of Saudi Research Science Institute at King Abdula
University for Science and Technology. Dr Amal is a member of the International Affairs
Advisory Committee at AlFAisal University. consultant with King Abdulaziz and his
companions foundation for giftedness and creativity “Mawhiba” and is currently a board
member.
She has worked with Ministry of Economy & Planning, Ministry of Labor & Social
Development, Commission for Job Creation and employment, to support implementation of
Saudi Vision 2030.
Dr. Amal Fatani holds a PhD in Pharmacology and Toxicology from the Department of
Pharmaceutical Sciences at The University of Strathclyde, UK. Prior to her PhD, Dr. Fatani
obtained both her Master`s and Bachelor`s degrees in Pharmacology and Toxicology from
the College of Pharmacy at King Saudi University, Saudi Arabia where she is currently an
Associate Professor applying for Professorship.