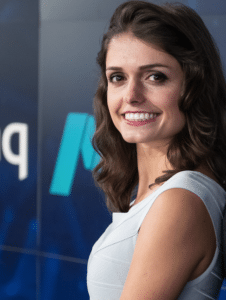 Alice Hlidkova is a visionary, futurist, and blockchain consultant and writer, based in Chicago, USA. Alice founded her creative consulting agency, Through the Changing Glass LLC to advise tech startups on positioning and capital raise in Silicon Valley. She helped launch MetroLab Network, a Carnegie Mellon University startup that deploys technologies such as IOT applications, traﬃc sensors, and autonomous vehicle pilot programs to cities for testing (the organization received funding from the White House and was recognized by President Obama in the ﬁrst 10 months of its inception).

In 2017 Alice joined the founding team of Pitch Investors Live, the only blockchain company for entrepreneurs and startups to pitch investors live, 24/7, via the app. Through her agency, Alice advises numerous blockchain companies including Women in Blockchain Impact Group WIBI and serves as the Strategic Partnerships Architect for leading blockchain news portal, Missblockchain. tech, where she is also featured as one of the main contributing writers.