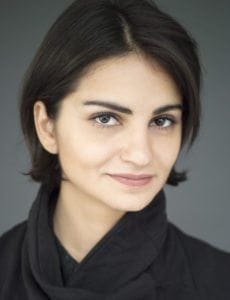 Ahd Hassan Kamel is an award winning actress and filmmaker from Jeddah, Saudi Arabia. She is best-known for her role as Fatima in the 2018 BBC2 /Netflix series, Collateral. and her starring role in the 2014 BAFTA-nominated film, Wadjda,

Ahd grew up in Saudi Arabia and moved to New York City in 1998. She received a BFA in Animation & Communication from Parsons School of Design in 2014 and a Directing degree from the New York Film Academy in 2015. Ahd then went on to study Acting under the personal tutelage of William Esper at the William Esper Studio.

Ahd has written, directed and acted in her two award-winning short films, The Shoemaker ‘Al-Qondorji’ (2009) and Sanctity ‘Hurma’ (2012).