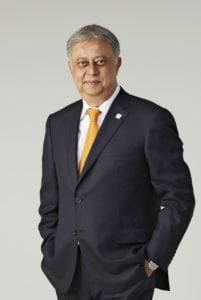 Driven by passion and a need to succeed, Yogesh Mehta established Petrochem Middle East in 1995.

Yogesh is credited with an ability to carve water out of stone and a burning desire to succeed against odds, having established a business by opening a state-of-the-art storage terminal for bulk and drum chemicals. Within five years, Petrochem Middle East grew from strength-tostrength to become one of the largest independent petrochemical distributor in the Middle East with global offices and a turnover of more than a billion dollars.

A Harvard Business School Alumnus, Yogesh’s success story has been widely documented, and in 2010 he was ranked seventh in the Arabian Business Indian Power List. Yogesh strongly believes that Petrochem Middle East’s success has been as a result of forecasting and anticipating market and customer needs, he is an enthusiast of “the people”, constantly asserting that his employees are the business’s greatest assets.

His grasp on the dynamics of the chemical industry, and on building a strong reputation with buyers and sellers in the fraternity has contributed to making the “Petrochem Brand”, and raising the company to new heights.

Under his leadership, Petrochem Middle East has evolved into not only a chemical distribution company but trading and logistics. With his son Rohan having joined the business recently they strive for growth and diversification into new industries and markets globally.