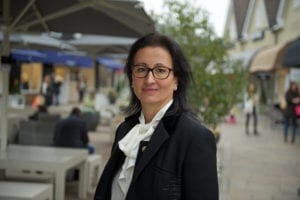 Sylvie Freund Pickavance is Group Director of Strategy and Business Development for Value Retail, creator and operator of The Bicester Village Shopping Collection.

The Bicester Village Shopping Collection in Europe and China is widely recognised as the highest performing shopping centre portfolio in the world, achieving more than 20 years of double-digit growth, since the opening of its first project, Bicester Village, in 1995. In her role Sylvie is responsible for delivering long-term innovation and development strategies for the group.

A strategic leader focused on luxury and experiential retail, Sylvie began her career operating the retail and marketing divisions for Cartier in Asia and in North America. She honed her global management skills with De Beers jewelers, where she served as International Sales Director for five years before being appointed CEO of Paris based Princesse tam tam, succeeding the founders after the company was sold to Fast Retailing in 2005. Under Sylvie’s leadership, in 2007, Princess tam tam introduced pioneering omnichannel strategies, and expanding its global distribution.

In 2009 Sylvie joined Value Retail, initially as Business Director overseeing several Villages: Bicester Village in the UK, Kildare Village in Ireland, Fidenza Village in Italy and La Vallée Village in France. Sylvie led the launch of the Collection’s first global CRM initiative and assumed the role of Group Director of Strategy and Business Development in 2014.

Sylvie is a graduate of ESCP Business School in Paris and studied at Shenzhen University gaining fluency in Mandarin.

She is a member of the jury for The World Retail Congress Awards and gives her time to mentoring young designers and charities in the UK and Italy.

Sylvie is a French national and is married with three children. She lives in London.