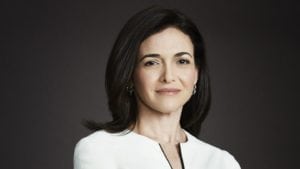 Department of the Treasury during the Clinton administration. When the Republicans swept the Democrats out of office in November 2000, Sandberg moved to Silicon Valley and worked for Google for seven years. She then moved to Facebook, where she has been COO since 2008. Sandberg is the author of Lean In: Women, Work, and the Will to Lead, which has sold more than a million copies.