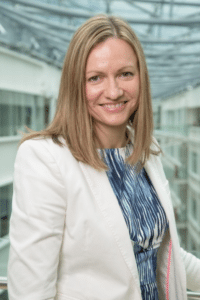 Sally Storey is the Vice President and General Manager of GlaxoSmithKline (GSK), Gulf Cooperation Council (GCC) since January 2018. She joined GSK in 1997 and held various commercial roles across the world, as well as in the company’s UK headquarters. Prior to joining GCC, Sally was the Vice President and Cluster Area Director for South East Europe and previously held the positions of General Manager in both Ireland and Hong Kong. She has a proven track record of successfully leading business performance and driving large scale strategic change.
Sally is currently responsible for leading the regional organization in translating GSK’s strategic priorities into effective actions to achieve the company’s mission of helping people do more, feel better, live longer. She leads a strong team which is committed to going beyond the industry norms to place patients first and provide them with access to the best-in-class medicines.
Sally was an elected board member of the Industry Trade Associations of Ireland and Hong Kong. She also was a non-Executive Director of Barretstown Children’s Charity, a co-founder and board member of the British Irish Chamber of Commerce and an advisory board member of the Women’s Executive Network.
Sally holds a degree in Chinese Studies from the Durham