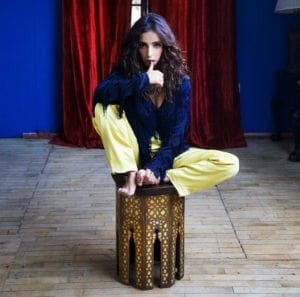 Rotana, named BBC’s 100 Most Powerful Women, is an artist and songwriter born and raised in Saudi Arabia. She moved to Los Angeles four years ago to pursue music after quitting her job at Saudi Aramco, the largest oil company in the world. Rotana describes these past four years as a “delayed adolescence” of sorts, learning boys, sexuality, self-power and freedom.

The greatest lover of Rotana’s life is the story. It’s the message over the medium. Whether she’s performing with her band or giving a keynote, she takes the audience on a journey of finding her voice as an artist, a woman, an immigrant and an entrepreneur.

Rotana has collaborated with brands Fendi, Vogue Arabia and Lucky Brand in their “New Class” campaign highlighting ‘a generation of those who dare to be anything but conventional’. Rotana is a brand ambassador for NastyGal, and was covered by LA Weekly, Huffington Post, and AJ+. She’a performed at the 2017 Sundance Music Festival, in Paris, Abu Dhabi, Los Angeles, New York and gave a keynote performance at VICE’s Emerge Impact Festival in Las Vegas this April. Rotana is currently working on her debut album.