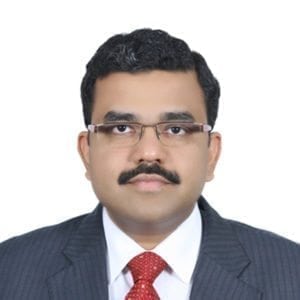 Promoth is the CEO of UAE Exchange Group. Responsible for formulating the organisation’s global strategy, Promoth leads global sales, marketing and operations, including end-to-end oversight of the branches and expansion plan along with the financial and operational performance, worldwide. He plays a key role in the strategic development and roll out of new products across UAE Exchange locations. UAE Exchange stands for commitment to customer satisfaction and business excellence, which Promoth personifies perfectly. Backed by his experience in a variety of roles, he is known for his exceptional ability to manage large and diverse teams and to nurture new business verticals and offerings. Promoth has also led the team that devised the risk and compliance strategy, which strengthened the global compliance of the organisation, building its goodwill among regulators from across countries, where it has operations. He has been at the helm of several key transitions at UAE Exchange in the last 10 years including restructuring, visioning and branding, which paved way for the transformation of UAE Exchange into a truly global brand.

Promoth was conferred the prestigious Excellence in Finance & Profession Award instituted by the Institute of Chartered Accountants of India (ICAI), Abu Dhabi Chapter, in 2015. 2016 saw him bagging the Finance CEO of the Year Award at the Indian CEO’s Awards by ITP Group.

An associate member of the Institute of Chartered Accountants of India since 2000, Promoth holds a Bachelor’s Degree in Commerce.