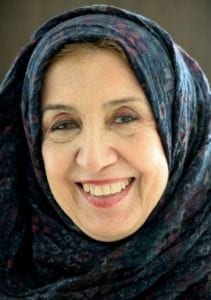 Prof. Samira Islam is the first Saudi woman to obtain Bachelor and Ph.D. degrees, obtain full professorship and become vice-dean in a Saudi university. She is the first Saudi to become Professor of Pharmacology and Regional Adviser of World Health Organisation (WHO) – Eastern Mediterranean Regional Office.
Throughout the years she has established herself as a well-known supporter and advocate of women education and empowerment. Prof. Samira has initiated formal university education for women in Saudi Arabia and became an establisher and Dean of various science and health programs.
Prof. Islam has published 36 research articles in scientific & specialized journals, and has presented 54 scientific researchers at national & international conferences & WHO meetings and 36 scientific presentations related to society, focusing on drug efficacy. Her researches focus on pharmacogenetic / pharmacokinetic and phenotyping which defined the Saudi population profile in pathways of some drug metabolism, was the 1st of its kind that became reference in literature.
She is a founded the Drug Monitoring Unit (DMU), providing drug blood levels (data) researchers’ publications and inform the treating doctors which accordingly adjust the dose for individual patients safety.
Prof. Samira Islam is a notable recipient of:
• “Makkah Award for Excellency” the highest for exemplary contribution to Science & Research
• UNESCO, L’Oréal “Women in Science” Award (Shortlisted)