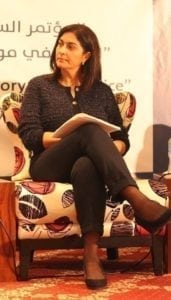 Maysoun Odeh is a Palestinian entrepreneur who schooled in Jerusalem at the Rosary Sisters High School and then went on to attend University in Grenoble in France, completing her qualifications in Economics at the American University in Washington D.C.

On her return to Palestine she worked in the private sector facilitating the entry of new products/services and then joined the newly established South African Embassy as the Advisor on Media & Trade to the Ambassador. Here she established a valuable network of contacts and enhanced bilateral relations, even travelling to South Africa to attend governmental trade and tourism courses.

In 2004 she married the South African Ambassador to the Palestinian Authority Rafiq Gangat, and left for South Africa where she began as a Media Consultant for PRIMEDIA and then set-up and managed in 2005 the first-ever English Radio Station in the Region, 93.6 RAM FM with state of the art studios in Jerusalem and Ramallah.

The station was closed down in August 2009. In August 2009 and with the partnership of the Swiss-based Womanity Foundation headed by businessman Yann Borgstedt, Maysoun set up Nisaa Fm, the pioneering All-Women Radio Station in the Region, and today she heads the operation.

Ms. Odeh is a recipient of the Schwab Fellowship, the first Palestinian entrepreneur to obtain such an award. NISAA FM has been a finalist in the Thomson Reuters Award in 2013 and NAWF in 2012 as well as the One World Media Award (2012).