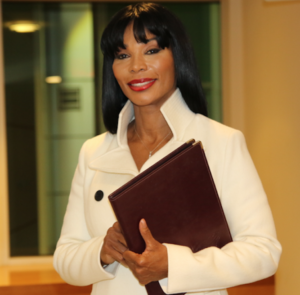 Hon. Lorna Johnson, an Olympic Qualifying Athlete in the 100-meter dash, is an immigrant entrepreneur of Cuban and Jamaican descent.  She ran her fastest 200-meter dash against Florence Griffith-Joyner, a record that stayed in the books for a long time. She also ran in the Mt. SAC relays where she ran the second leg of the relay with teammates Florence Griffith Joyner, Evelyn Ashford and Alice Brown, some of America’s greatest female sprinters.

After growing up in Jamaica, Johnson moved to the U.S. after studying in Canada.  She obtained her Masters of Science in Nurse Midwifery and Finance from the University of Southern California, inducted in the honor societies Phi Kappa Phi and Sigma Theta Tau.  She is the CEO of AFC Management Company and CFO for AFC Medical Group, providing maternal healthcare in East Los Angeles, serving women who all too often were suffering from lack of proper maternal health care.  The serial real estate investor worked to build the business for a community in need.  After identifying the impact one can make by empowering others by investing in the youth, she now invests in communities both locally and around the world, from East Los Angeles to Jamaica, Malawi and beyond.  Continuing the legacy of her mother, Johnson has been a dedicated philanthropist and community leader.  She is Founder and CEO for Compassion For Teen Life, a non-profit organization providing supportive services focused on living healthy lifestyles and the importance of continuing education to low-income children and their families globally.

Lorna is a past appointee of President Barack Obama to The President’s Advisory Committee on the Arts at The Kennedy Center.  She also served as a member of the President’s Advisory Board, the Healthcare Committee, and the National Finance Committee.  She has served as Past Surrogate to US Presidential Candidate Hillary Clinton and served on the National Finance Committee for the Hillary for America campaign.  She is also a Past President of the local Chamber of Commerce in Los Angeles, Past Lecturer/Clinical Professor at the prestigious UCLA and was named one of Seven Wonder Women of the World by the London based organization Investing In Women.

She is currently the Honorary Consul of Jamaica in Los Angeles, serving as Past Secretary to the Los Angeles Consular Corp.  She is the Assistant Treasurer of the DNC, Essayist with the UN Foundation for Women and Girls and globally recognized speaker on issues surrounding women, girls and immigrants.  She currently sponsors 30 girls in Malawi, partnering with 3-time Olympic medalist Alice Brown, in training and identifying talents for the upcoming Olympics.