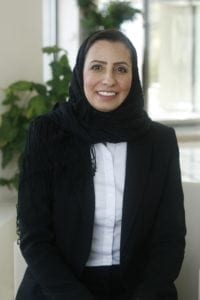 Based in Dhahran, Saudi Arabia, Lamah F. Al-Khayyal is the division head of Women Development & Diversity, under Saudi Aramco’s Human Resources. Her division oversees three units that impact the population of Saudi Aramco, while also building the pipeline of future female talent.

Lamah held leadership roles in the Upstream Business line for 5 years, working with the Upstream Professional Development Center, heading the Training and Delivery Group while also covering for the Business and Center Operations Group, and the Strategic Planning and Special Projects Group. During this time, she also covered as the administrator for the Corporate Academy Development Division under Training and Development, along with leading other groups.

Previously, she has held positions in Employee Information Systems, and in the Personnel Department, working on multiple high level projects such as HR Online, Management Briefcase, and the automation of Chapter 8 and Aramco employee allowances. She also contributed to the Non-Employee Planning group, where she established the first KAUST Coop Program.

Lamah holds a Bachelor’s Degree in Information Technology from the University of Phoenix, and a Master’s Degree in HR Management from Texas A&M University.