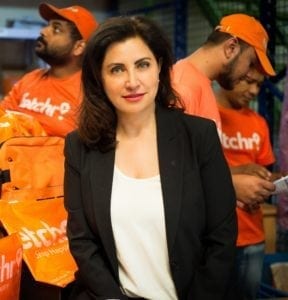 Joy is an e-commerce industry professional. She is the co-founder of Fetchr, a Silicon-Valley backed technology company based in Dubai aimed at solving the “no-address” problem hindering growth in emerging markets. Fetchr uses patented technology allowing people to use their mobile phone’s GPS location as their address. Fetchr is the first start-up in the Middle East to be funded by the largest and most successful venture capital firm in Silicon Valley, NEA. Ms. Aljouny, on behalf of Fetchr, was on the cover of Forbes Magazine in the Middle East, which named Fetchr the #1 startup in the region. Prior to Fetchr, she founded Bonfaire, an e-commerce discovery platform for luxury footwear and accessories. Bonfaire was acquired in 2013 by fashion e-commerce giant Moda Operandi, owned by LVMH and Condé Nast.
While only 2.7% of venture capital funding has been raised by women, she has successfully raised funds for two startups from the most prestigious Silicon Valley venture capital firms. This puts her in the top 1% of female entrepreneurs. She is passionate about using technology to solve persistent issues in emerging markets, as well as empowering women entrepreneurs to break out of traditional roles, especially in the Middle East.