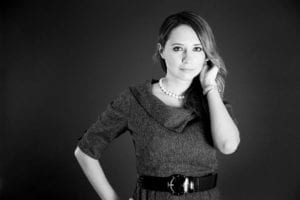 Hermoine is the CEO of Straight Street Media, Author of the book “Faces of the Middle East” and the first Australian female English speaking TV news anchor in the Middle East.

Prior to establishing Straight Street Media in 2012, Hermoine was one of the main anchors on Dubai One TV’s Emirates News. Her portfolio includes the delivery of live-to-air news bulletins, frequently whilst being in the midst of breaking stories both locally and across the Middle East.

She has also hosted hundreds of other shows, including the three-hour live launch of the Burj Khalifa, “Maak Ya Lebanon”, which raised 55 million dirhams to help people caught in the conflict and more recently “Pride of the Nation” featured on Fox TV Middle East. Hermoine has also interviewed a variety of decision makers, from the Duchess of York to Hollywood actor Michael Douglas and government officials across the Arab world.

In 2014, Hermoine’s love for the Arab people led her into war-torn Iraq, where she set up the House of Rest – a privately funded, non-political and non-governmental resource center run by women for women survivors of sex slavery, war, violence and oppression.