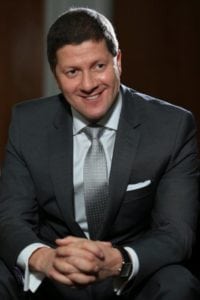 Faysal Elhajjami moved to the Kingdom of Saudi Arabia in April 2016 as Country General Manager.

Born in the UK, he graduated with a First Class Masters Degree at UCLAN and remains a visiting lecturer covering areas of international business and logistics.

Following three successful years with Marks and Spencer in store management and area general management, he was later transferred to HQ in London Baker Street to lead a re-branding project.

Mr. Elhajjami joined DHL Saudi Arabia in 2001 as Country Commercial Director, followed by his appointment as Head of the Oil and Gas Industry for EMEA; and Latin American regions based out of HQ in Brussels. During this time he led the development and construction of Oil and Gas Strategy resulting in the implementation of infrastructure projects in Africa and Eastern Europe; industry specific product launches and market entry initiatives. He was later appointed as Head of Products and Trade Lane for EEMEA based out of Bahrain managing product development, product extensions and harmonisation of the Express product portfolio.

In 2008 Mr. Elhajjami was given the role of Commercial Director for DHL Aviation covering Eastern Europe, Middle East and Africa. Within this scope he was managing Air Capacity Sales, sourcing and marketing charters and producing uplift for DHL business units.  In 2010 Mr. Elhajjami was promoted as Managing Director, covering Morocco; Algeria; Mauritania; Tunisia.

During his time in Morocco, Mr. Elhajjami completed a six million Euros investment opening up the first dedicated DHL Express Hub in North Africa; Nouasser Casablanca, followed by adding a 6th rotation to the existing five days a week Boeing 757 Freighter landing in Casablanca, as well as list of high level projects in Algeria, Tunisia and Mauritania.