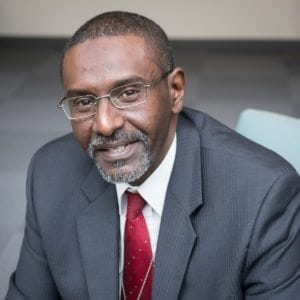 Dr. Mohammed is the Country Director of the GCC countries in the Middle East and North Africa region of the World Bank. He joined the Bank in 1998 as country economist for Egypt and Yemen, became Country Manager for Albania, and returned to the Middle East and North Africa (MENA) region as Operations Director in 2007. During 2010-2012, Dr. Mohammed was on external assignment from the Bank where he served as Acting Director of Strategy at the Kuwaiti Prime Minister’s Office. He also served as a Senior Advisor in the Poverty Reduction and Economic Management (PREM) network during 2009-2010 and 2012-2013.
Before joining the Bank, Mr. Mohammed worked in two multilateral development banks (African Development Bank, 1994-1996) and the Islamic Development Bank (1996-1998). Mr. Mohammed started his career in academia as a lecturer and research officer at universities in Khartoum, Addis Ababa, Cambridge and Oxford.
Dr. Mohammed is a graduate of the University of Khartoum (BS in Economics) and has two post-graduate degrees in Economics from the University of Cambridge (M. Phil and Ph. D). He published widely on issues of economic development, public finance, conflict and civil wars, natural resource management, poverty reduction, governance and defence economics.