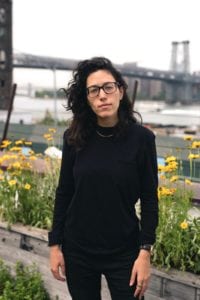 Ariel Wengroff is currently an Executive Producer of the Emmy nominated VICELAND show WOMAN with Gloria Steinem and Publisher of Broadly, VICE’s women’s interest channel. Wengroff was formerly a series associate producer for the award winning series Vice on HBO and Chief of Staff where she worked closely with Vice Media Founder and CEO Shane Smith. Wengroff previously was the Communications and Finance Director for Welch For Congress and before that the Communications Director of the Vermont Democratic Party. From 2010 to 2012, Ariel worked in the Office of Vermont Governor Peter Shumlin as a Constituent Correspondent and then as a Special Assistant to the Governor where she worked on emergency disaster response for Tropical Storm Irene. A recipient of the Wainwright Poetry Award, she writes for The Huffington Post, Vice Media, BBC and her work is published in the United States and Europe. She is currently on the board of Lesbians Who Tech and is a former commissioner on the Vermont Commission on Women and former member on the Vermont Board of Libraries.