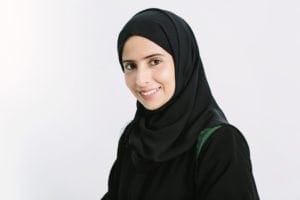 Amna joined the DIFC Courts in 2006, she became the Deputy Registrar in 2008 and Deputy Chief Executive of the Dispute Resolution Authority in 2014. Previous to her employment at the DIFC Courts, she practiced as a lawyer in the litigation department with Hadef Al Dhahiri and Associates (Hadef & Partners now) in Dubai. Prior to that, she trained at the UAE Ministry of Justice and was admitted to practice in both the Dubai local and federal courts. Amna obtained her Masters (LLM) with Commendation in International Commercial Law from Kingston University, London.
In addition to her role as Deputy Registrar of DIFC Courts she is also Deputy Registrar of the Special Tribunal Related to Dubai World, Chairwoman of the DIFC Courts’ Users’ Committee, a member of the Consulting Council for the University Of Sharjah College Of Law. In 2014, after an extensive selection process Amna was selected to join the Mohammed Bin Rashid Centre for Leadership Development – the Young Leaders category and in the same year, appointed to the Advisory Board of the International Bar Association’s Access to Justice and Legal Aid Committee.