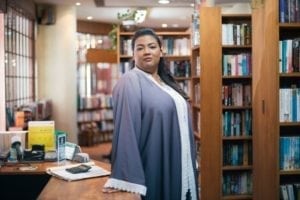 Afra Atiq is an Emirati award-winning poet, having recently won the ADMAF Creativity Award. She is the first spoken word poet to win the award.
In early 2016, Afra left the corporate word, with nothing but faith, to pursue poetry. She has been featured in 13 cities across 4 countries and proudly gives back to her community through mentorships and workshops with Untitled Chapters (a thriving hub for Emirati female writers).
She has been a featured performer/speaker at platforms like the Emriates Airlines Festival of Literature, STEP Music Festival, TedxAUS, TedxTCHS, NYUAD, Sheraa Sharjah, as well as at numerous universities and schools.
Afra was named Best Performer for 2015-16 by Rooftop Rhythms and has performed at the legendary Nuyorican Poet’s Cafe in New York. In addition, she is the only Emirati to perform at the Bowery Poetry Club and win the PoetsNY poetry slam at the same venue.
She holds a Master’s degree in International Relations and Diplomacy (specialising in Middle Eastern politics, gender policies and power dynamics) and is pursuing a PhD at UAE University —however, performing poetry takes center stage in her life.