5 stereotypes about Saudi women that need to be broken 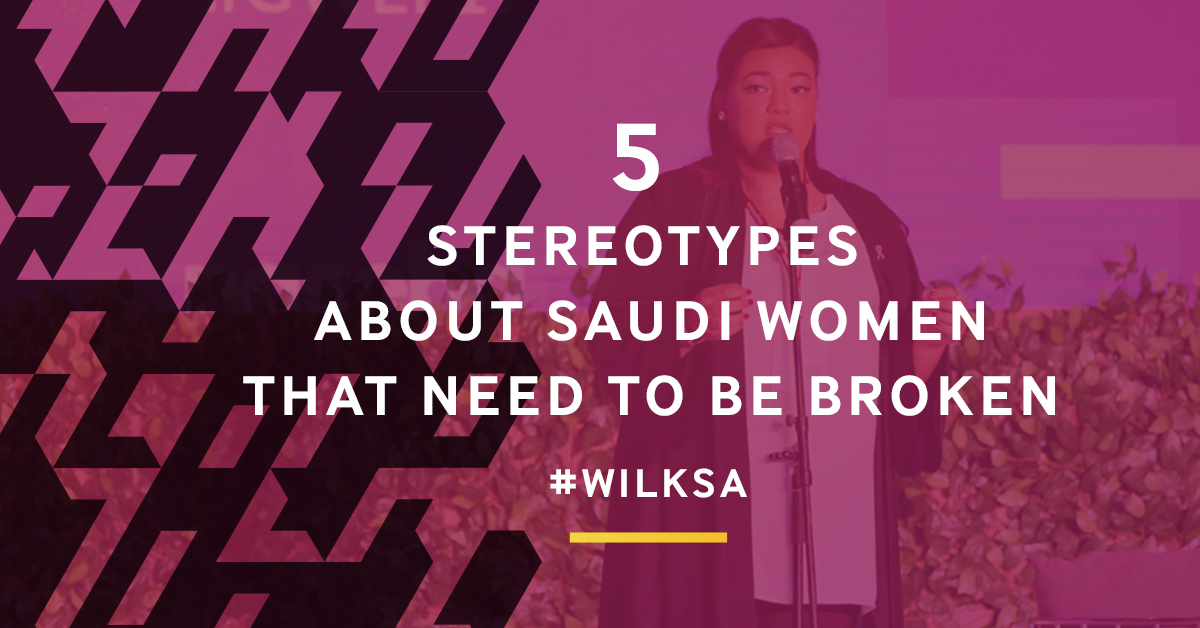 While the Kingdom keeps building on the objectives of Vision 2030 and gives women more opportunities, it is necessary to change the narrative around them.

As we gear up for the WIL Economic Forum KSA, we listed the 5 stereotypes about Saudi women we are working to see disappear.

1. They are not educated

The first schools for girls in Saudi Arabia opened in 1957 with the General Administration of Girls’ Education established in 1960 and the first university for women following in 1970. Since then, female education has increased significantly and today, female students are better represented than their male counterparts in the university system, with females accounting for 52% of all university graduates in 2015.

2.  They are not entrepreneurial

Entrepreneurship doesn’t just launch new business ideas – it creates more jobs. Under Vision 2030, the kingdom has ambitions to increase female participation in the workforce to 30% and reduce overall unemployment to 7%. Entrepreneurship will play a significant part in achieving this and, as a result, the Saudi government has introduced a number of initiatives to support women entrepreneurs. As a result, almost 40% of the startups launched in 2016 were owned by women.

3. They are not independent

Not true! Independence comes in many forms and is a common trait among successful people. In fact, independence – along with huge measures of courage and physical fitness – is what drove Raha Moharrak to become the first Saudi female to conquer Everest, Kilimanjaro and six other major summits around the world.  Meanwhile, Hala Al Hamrani is the kingdom’s only female kickboxing and boxing trainer.

Halah is joining the lineup of trailblazers and innovators at the next edition of the WIL Economic Forum KSA.

4. They are not part of the government

The government of Saudi Arabia appointed its first female minister in 2009. Nora bint Abdullah al-Fayez, a US-educated former teacher, was made deputy education minister in charge of a new department for female students. In 2015, her presence was strengthened when the kingdom announced women would be allowed to vote and be elected to government. Joining the cause, in December 2017 Belgium became the first country to appoint a female ambassador to the Kingdom.

5. Their situation will never change

Saudi Arabia is changing all the time and 2017 was probably the most significant year for change in the Kingdom’s modern history, following a number of announcements from the new Crown Prince, Mohammed Bin Salman. Under Vision 2030, Saudi Arabia is returning to moderate rule and opening its economy to ensure that diversity and inclusion are the cornerstones of the new era.

Supporting this, the WIL Economic Forum KSA – held under the theme ‘Let’s talk about tomorrow’ – provides a platform to leverage the opportunity change creates.

Over 1,000 business leaders, D&I champions, entrepreneurs, youth, and policy-makers are gathering at the WIL Economic Forum KSA on March 19 and 20, in Riyadh, to champion diversity and celebrate game changers at a critical time in Saudi Arabia’s history.

Building upon the key objectives of Vision 2030, the forum centers around innovation, economic empowerment, entrepreneurship, D&I and Saudisation.

To register for the forum please for half the price, click here.